Photos from the events are collected on a public album on my Facebook ~> Album.

This entry will be the blueprint for the FM radio education kit which we have used for the maker session.
Goal of all this is for the Kids to have an opportunity to create a radio while pairing up with a LM386 amplifier which they will be building in the same session.

The FM radio uses the digital RDA6807 tuner module while the brain of the whole circuit uses an Attiny85 micro-controller via off the shelf Digispark module.
The digital seven segment display is a low cost (80 cents) clock module mass-produced from China, TM1637. Though cheap, it does come with a price, the control signal is not compliant to standard i2c thus requiring bit banging of 2 dedicated i/o line. 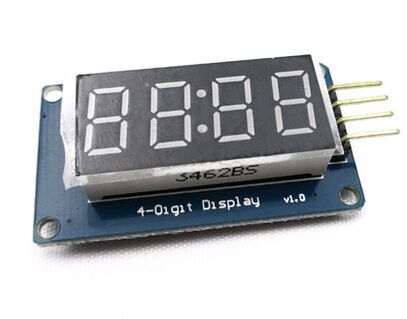 Radio frequency seeking is done using a PotentialMeter (variable resistor) through an analog input pin, while a push button switch is also provided to allows quick “seek” to the next available station.

A bonus functionally was also added in the end which allows the radio to keep track of the time using a standard RTC module. Again China has made off the shelf modules ready and cheap. I have chosen a small module meant for the raspberry pi community. DS3231 module.

On to the schematics for the Radio. The following shows the Digispark micro-controller with the hardware interfaces. 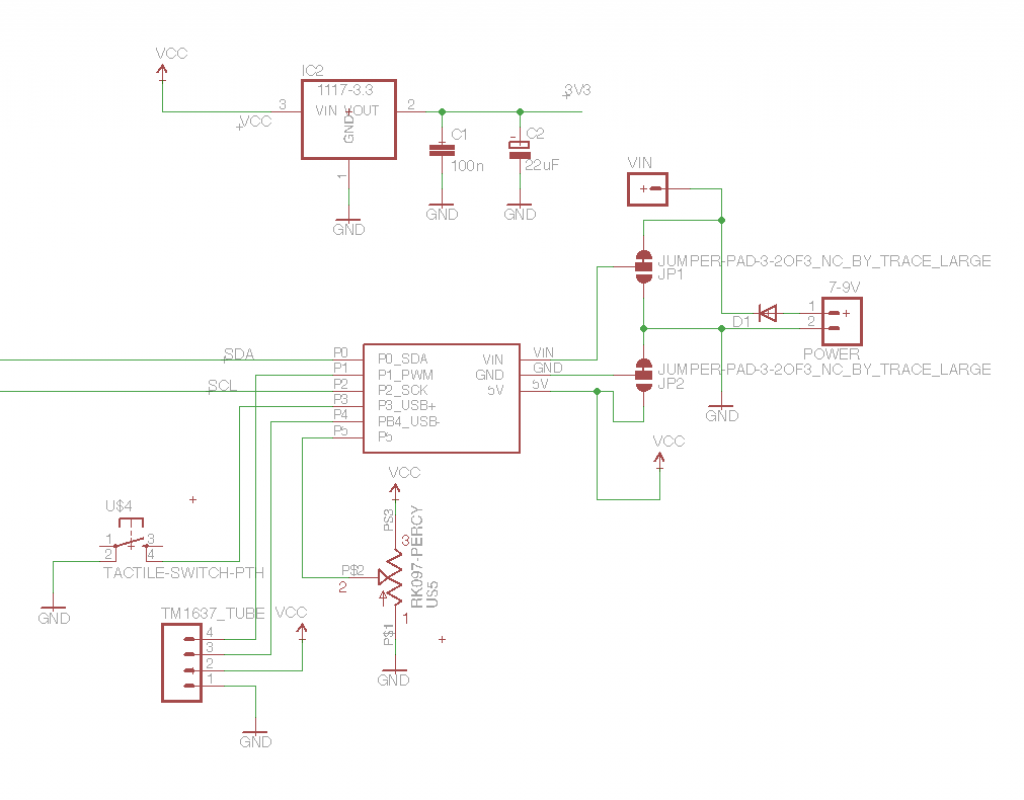 The i2C then branches out into both the RTC module and through a 5v<->3v3 level shifter to a RDA5807 tuner module. 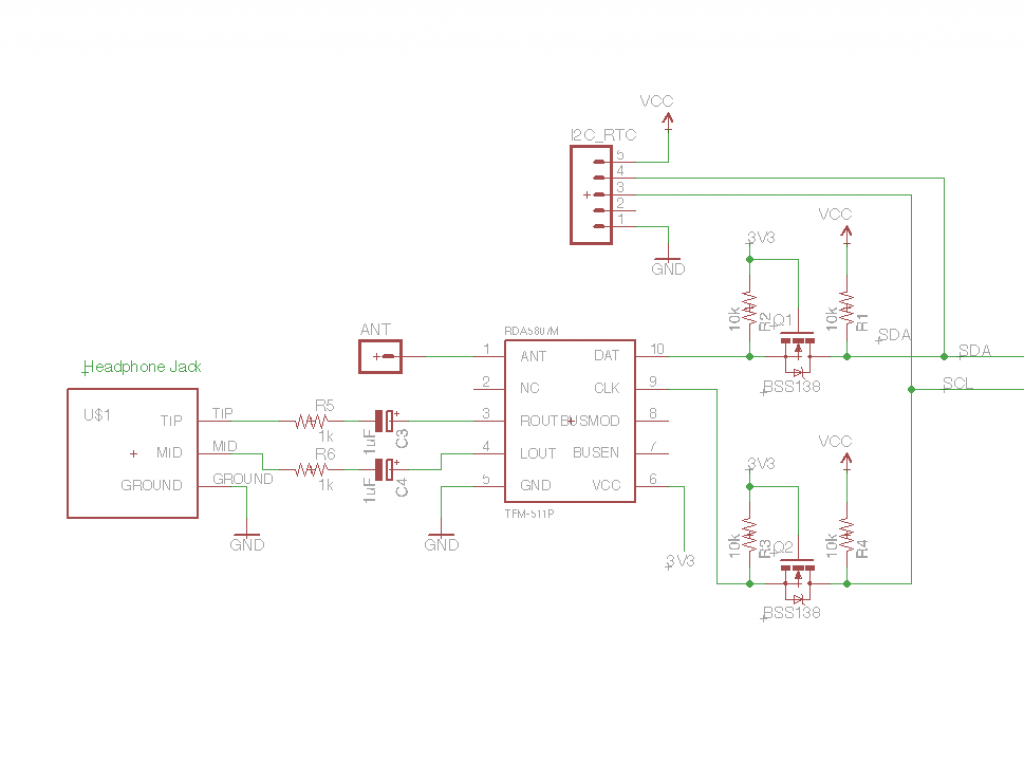 The Digispark controller is programmed using a familiar Arduino software, since this is not an official Arduino board there would be a need to set up the board accordingly in your Arduino software. Digistump (Manufacturer) has provided a detailed guide line on how to get it connected. Digistump Guide

The firmware could be downloaded from the following link. Attiny_RDA5807m_Final.ino

Loudness Hack:
As the circuit was design with a secondary amplifier in mind, you might have notice the sound volume might be a bit too soft to your liking.
To increase the volume, you can either decrease the resistor R5 & R6 value down from 1k. Or you can simply short the resistor with a blob of solder lead. 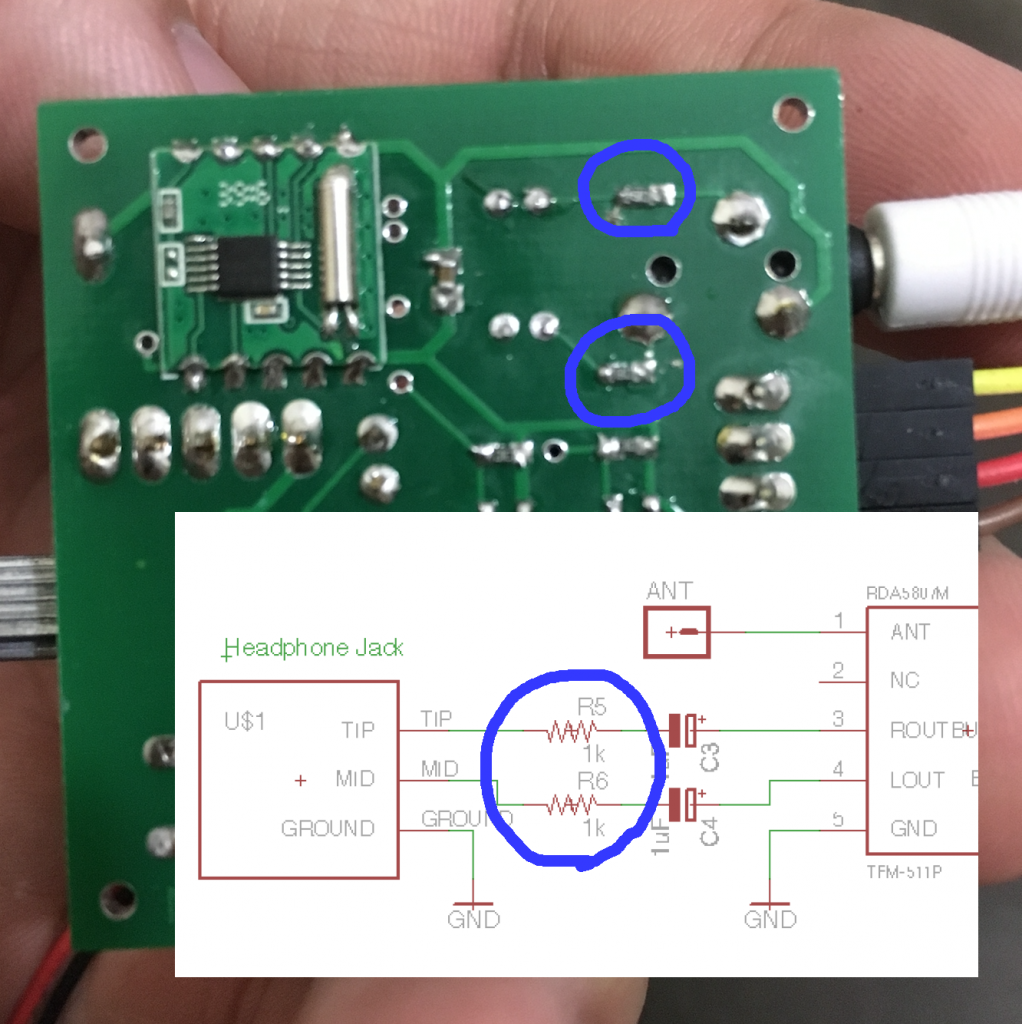 Errata:
The Radio PCB is missing the input polarity protection diode, the circuit will work fine with the micro-usb cable as a power supply. But with the 9V battery clip, you have to pay careful attention to the polarity of the pin headers as well as the 9V clip orientation.
Workaround:
We can add an input diode protection. Common rectifier diode such as 1N4001 will do wonders here.
2 Steps are needed. 1st, carefully cut a track on the designated Jumper on the top layer of the PCB as shown by the 2 red arrows.

Next we are going to bridge the cut copper jumper track with a power diode on the bottom layer of the PCB.