For some of us (Electrical Engineer) that has been put off from switching to a OSX based computer due to a shortage of EDA tools available for this platform can have a slight joyous moment. After been using Cadsoft Eagle PCB for years (One of the lowest cost PCB routing software), needless to say I am reluctant to step away from this software when it comes to Schematic and PCB layout. Having to learn a new piece of software is a working adult biggest nightmare.

Solution to run Eagle PCB is via virtualization, and we do not have much other option in that department. Performance is sluggish and worst of all, the Parallel Software and Additional Windows Operating System added an extra un-needed overhead on the machine, in the end my poor Macbook is running at 100% cpu load all the time desperately gasping for more cold air.

Cadsoft came to the rescue by coming out with an official OSX port of the Eagle PCB, and after using it for a while all I could say is that the experience is just great. The GUI remain virtually the same but now it is a native OSX application, which means less CPU load thus cooler Laptop and easy application switching as the background application still remain super responsive.

Conclusion: Overall a well done piece of software, though it doesn’t have the look and feel of other OSX application we can migrate our experience we have gained over the years of the Windows version quickly, so we can quickly forgive Cadsoft for it. Some of the functionality is not as well polished as we hope it would, but we can just live with the workaround on the problematic areas. 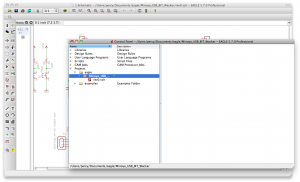